On October 16, 2018, contemporary street artist, Shepard Fairey held a private launch party for his new mobile app, “DAMAGED” with VRt Ventures and Juxtapoz Magazine at pop up gallery 136 Bowery. Prior to the event, YRB sat down with Shepard and Jacob Koo to discuss the original Damaged exhibit, politics, virtual and augmented reality and of course…Art.

YRB: What was the purpose of transforming work from the Damaged show in a Virtual and Augmented Reality experience? Was it more about preservation or just getting it out there?

Shepard Fairey: It’s both. I put a huge amount of effort into the Damaged show.

It was 2 years worth of work. 230 pieces, the murals, the billboard installation, sculptures, all the content for the newspaper, the printing press, building the newsstand and giving a bundles of newspapers away.

It was also difficult finding a space in Los Angeles that was a really ideal hybrid of my industrial/street utilitarian roots that’s been merged with a cleaner gallery presentation.

I felt like this is a strong representation of where I am in my art career and it’s only up for a month!  But, when Jacob from VRt came to the show, they had already done the Kerry James Marshall virtual and augmented reality for MOCA.

“OK this is the next thing that we wanted to because this isn’t a white wall gallery this is an immersive space that you really have to be here to appreciate it, but if you could at least 3D map in really rich detailed way, then it’s the next best thing.”

They understood my philosophy of art as a tool of empowerment that should be democratized. The more people who were creators not just spectators and consumers the better and that people can have access from any part of the globe.

YRB: How long did it take to map and turn the original Damaged show and prepare it for AR and VR?

Jacob Koo: The entire process took approximately 10 months from the date of “capturing” the exhibition utilizing laser scanning and volumetric photogrammetry to the official launch of the app on October 15, 2018.

YRB: Has all the messages and topics been apart of your art or did it evolve over time?

Shepard Fairey: Street art is a tool of of expression, communication and empowerment.

The Andre sticker started basically an inside joke with some skateboard friends.
But I quickly realized that the reason it seemed to be infecting things was that it was a novel thing in novel places and disruptive. I quickly started to pick up on the idea of encouraging people to question the control of public space and all the media that they’re presented with.

The OBEY campaign we hope so it was an evolution and progression but I already had the framework of loving dystopian writers like George Orwell and Ray Bradbury and then music like The Dead Kennedys, Public Enemy, Bob Marley and The Clash.

Art that has of sort of an activist agenda even if people initially are just attracted to esthetic or the sound that you can weave that in there and then before they know it they were the absorbed it. I LOVE that idea! There were other visual artists that were doing things like that like Barbara Kruger or Robbie Conal out now LA with his anti-Reagan images and there people like Duchamp who were of mischievous and disruptive. I was always attracted to that and being playful, having fun, being irreverent and also doing that in service of critiquing the status quo and you know in and and promoting you know a little bit of a question everything and and maybe moving toward social Justice and and that’s just become more entrenched in everything I do. When Bush took office in 2000, I was like alright, I need to start focusing in on issues because how could this happen??

Prior to that I felt that I wasn’t qualified but then I realized wait, the people actually making the laws aren’t qualified!

The rudimentary amount of research that I have done I’m actually realizing listening to people being interviewed that I’m more qualified to talk about these subjects than a lot of the people who are running shit! (laughs)

Sometimes you realize it is time to act out a necessity.

YRB: Is that something down the line? Would you run for political office?
SHEPARD FAIREY FOR PRESIDENT has a nice ring to it. I know the campaign posters would be sick!- lol

Shepard Fairey:  No. I will not run for political office because I’m not enough of a glad hander. I’m good with diplomacy when it comes to working sort of the inside outside strategy. When I have opportunities to infiltrate the system and try to change the culture for the better from within, I think I’d be an idiot not to take those opportunities but that doesn’t mean that I want to work day in day out inside a system that where I have to deal with a lot of bureaucracy, a lot of stupidity and a lot of compromise.

YRB: Were you a fan of Virtual Reality and Augmented Reality technologies before this project?

Shepard Fairey: I have a lot of friends who are into the technology and are excited about VR. I’ve seen several demos of different things and thought it was cool. Most people don’t have an Oculus so I didn’t really stick to my ribs at first, but then I saw what the VRt was it was able to do with the Kerry James Marshall show it was really enticing.

I am a populist and I want art to be more democratic.

When you look at all the sort of different media out there like first person shooter games and if somebody decides to forego that to check out an art app, then great! I’m so excited that art can be something that people come to through technology.

People are intimidated by art but they love gadgets.

If I’m getting my art in front of more people and this technology is a great way for them to experience that show or be introduced to my art and to get a deeper understanding of where I was coming from that helps them understand the rest of work. All of that is valuable and I think it will valuable for a lot of other artists too.

YRB: Why did you start VRtVentures?

Jacob Koo: We believe in virtual reality because VR technology allows people to be somewhere that they are physically not, which creates so many interesting and incredible opportunities. And when thinking about potential applications for virtual reality, we realized that art exhibitions are inherently temporary and that utilizing VR technology to capture these art exhibitions that disappear after a few weeks or months would be a great and useful application.

YRB: Was it always a plan to do it in both formats for different experiences? (phone -AR or VR Oculus.)

Jacob Koo: When first starting our company, our intention was to only complete virtual reality experiences. However, we realized that as of today, too few people own VR devices so our market of potential users was quite limited. We want to reach as many people as possible, so it was the necessary decision to not only make VR apps but apps for mobile phones. With the potential for AR, as well as VR, we believe that it was the right decision and the only decision.

YRB: What is the estimated cost associated with it?

YRB:  Where do you see AR and VR technologies in the next 5 years?

Jacob Koo: Both AR and VR are truly in its infancy as of this date.

The first smart phone was actually the Palm Pilot, followed by the Blackberry, and then the iPhone, which was a little more than 10 years ago. The Palm was interesting, the Blackberry was incredible, but the iPhone truly changed the world. We believe that sometime in the next 5 years there will be a game changing development in a device that will change the story and push the world into mass adoption.

YRB: What’s next for Vrt Ventures?

Jacob Koo: We’re not sure really. At this early phase of the technology, it is really important to navigate properly. Our idea is much bigger than our actual product.

The fact that every art exhibition in the entire planet can be visited on your mobile phone or virtual reality in the future is not a small thing, but the truth is that this would be something like us saying 20 years ago that someday every art museum would have a website and people not understanding what that meant.

We will continue to develop with exciting artists and continue to push forward in interesting ways.

YRB: What’s next for Shepard Fairey?

Shepard Fairey: Next year is the 30th anniversary of the original Andre sticker.

June 1989, is when I made the original sticker and June, 2019 I’ll be doing a museum show in Grenoble, France where André René Roussimoff better known as André the Giant was born.

I’m grateful that I still have a lot of energy to make new work, but I also think 30 years is significant enough to create capsule of some of the stuff and I think was important along the way.

Throughout the rest of the night, guests were able to step inside Shepard’s largest solo exhibit to date through the App’s VR functionality.

The event, Which was produced by ABSTRKT NYC, featured sounds by legendary DJ Stretch Armstrong, bites from Sweet Chick and beverages by 1800 Tequila and Estrella Jalisco. 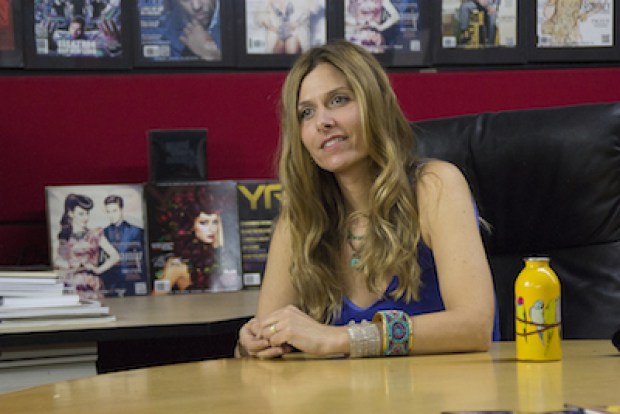